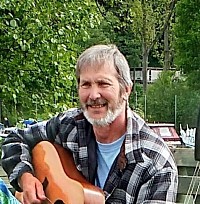 Birmingham born singer/songwriter Paul Hamilton has for the past 30 years written and performed his self pen composition's both as a solo artist and as lead vocal in the Ridgetop Mountain Boys.  His first CD called "Bigtree" was released 1998, a mixture of ballad's, blues and folk.
He was interviewed by Carl Chinn on his popular show BBC Radio West Midlands in April 1999 about a song on the "Bigtree" album called "The Brumagum Boatmen" a folk song about the lives of the boatmen who navigated the Worcester & Birmingham canal near his childhood home in Selly Oak Birmingham.
Then came "Blue Eyes" Cd in 2000, the title track was written about Paul's wife Margaret and her Blue eyes. This CD is a collection of Ballad's and Folk songs that included "Romany Man" a song very well received wherever is was performed.
In 2001 Paul started writing material for a country CD called "Memphis Moon". Some of these tracks were posted on the internet in 2002 and were heard by a producer in Nashville who invited him to attend the Nashville Songwriting Festival. So Paul wrote and recorded a Cd called "Acoustically Yours" especially for the trip and with accompanying guitarist Steve Hadley from Stourbridge they flew into Atlanta in May 2003. The schedule also included playing on Broadway at "Roberts Bar" and the "Broken Spoke Bar", and they visited the famous "Bluebird Cafe" They also toured Tennessee, Kentucky, Texas, and North Georgia taking in all the sites. Paul has lived in the north Worcester village of Cookley for over 30 years

All CDs are available to purchase on this site. 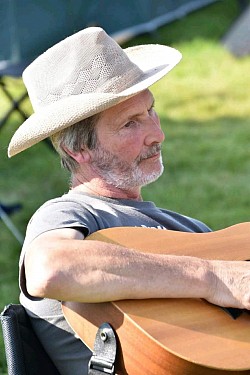 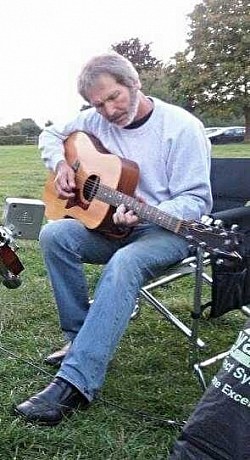